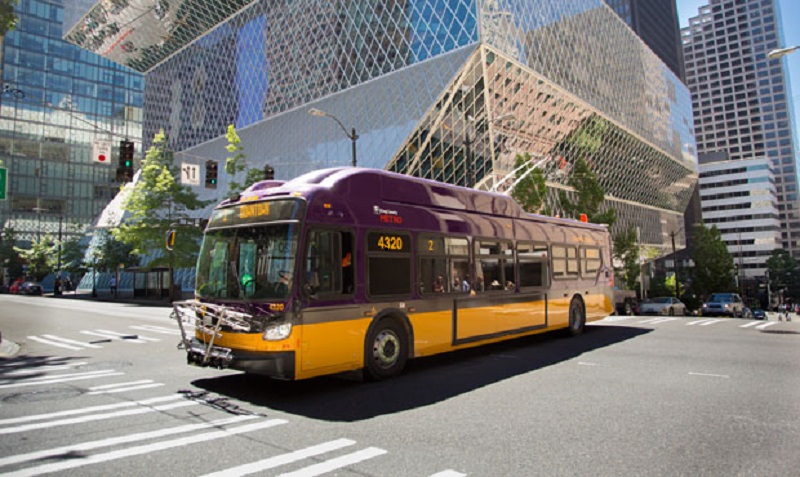 Getting Around in Seattle

Seattle is a sprawling city with lots of neighborhoods to explore, a lively downtown core, and a half-carny waterfront that attracts the sea-lion’s share of tourist attention. Seattle is notorious for its traffic jams, so avoid them: most visitors find they do just fine here on foot, or using public transportation. Unless you’re planning on taking a lot of day trips out of the city, you don’t need your own car to enjoy a vacation in Seattle.
Central Seattle—including downtown, Belltown, Seattle Center, South Lake Union, the waterfront, and Pioneer Square—is fairly compact and walkable. There is also a good bus system, a streetcar that connects downtown to South Lake Union, and a light-rail system that connects Seattle to the airport and makes some stops along the way.
If you’re staying in downtown Seattle, a car is unnecessary. Parking is difficult and expensive, and Seattle traffic jams are awful. If you are planning a day trip to Mount Rainier National Park, however, a car is necessary. And a car makes getting to Seattle neighborhoods like Ballard, Fremont, and Capitol Hill easier (though you still have to find a parking space when you get there).

If you’re planning to travel around Seattle on public transportation, consider getting an All-Day Regional Transit Pass for $8. You can use this pass on all of Seattle’s public transportation services except for the monorail and on Washington State Ferries. The downside is that you have to buy an ORCA card (a reusable transit card that costs $5 and can be refilled) in order to download the $8 all-day pass from a vending machine. Seniors can get the all-day pass for $4, and the ORCA card for $3.50.

BY STREETCAR One line of the Seattle Streetcar (www.seattlestreetcar.org) runs from downtown to Lake Union. The newer Capitol Hill line runs north-south along Broadway to Pioneer Square. The Lake Union line will take you to the Museum of History and Industry on lake Union; the Pioneer Square line will deposit you in the heart of Seattle’s historic district, where you’ll find the Underground Tour, Smith Tower Observation Deck, and lots of architectural and artistic character. Fares are $2.50 for adults, $1 for seniors, $1.50 for ages 6 to 17.

BYBY LIGHT RAIL BY The Central Link Light Rail (www.soundtransit.org) runs beneath 3rd Avenue from Westlake Station to Sea-Tac airport, making key downtown stops along the way including Pioneer Square and the Chinatown/International District, and north to Capitol Hill (for strolling, shopping and dining on Broadway) and the University of Washington. Adult fares range from $2.50 to $3.25 depending on distance traveled and time of travel; the senior rate is $1, and youth rate is $1.50.
BYBY MONORAILBY The fastest way to get between downtown and Seattle Center is the historic Seattle Monorail (www.seattlemonorail.com; tel. 206/905-2620), an elevated train built for the 1962 Seattle World’s Fair. It leaves every 10 minutes from Westlake Center shopping mall (Fifth Ave. and Pine St.) and covers the 1 1/4 miles in 2 minutes, dropping you off near the Space Needle. The monorail operates daily from 9am to 11pm (in winter, Sun–Thurs 8am–8pm; Fri and Sat 9am–11pm). Departures are every 10 minutes. A one-way fare is $2.25 for adults, $1 for seniors, and 75 cents for ages 5 to 12.

BYBY WATER TAXIBY A water taxi runs between Pier 55 on the downtown Seattle waterfront to Seacrest Park in West Seattle, providing access to West Seattle’s popular Alki Beach and adjacent paved path. For schedules, check with Metro (http://metro.kingcounty.gov). The one-way fare is $5.25 for adults and ages 6 to 18, $2.25 for seniors.

BYBY FERRYBY Washington State Ferries (www.wsdot.wa.gov/ferries; tel. 800/843-3779 or 888/808-7977 in Washington or 206/464-6400) is the most extensive ferry system in the United States. These big passenger and car ferries, used primarily by commuters, won’t help you get around Seattle itself, but they offer great options for scenic trips from downtown Seattle to Bremerton (1-hr. crossing) and Bainbridge Island (35-min. crossing), among other destinations. One-way walk-on (no car) fares between Seattle and Bainbridge Island are $8.20 for adults, $4.10 for seniors and ages 6 to 18. You’ll pay more, of course, if you take your car.

Leave those four wheels at home. Seattle’s traffic congestion is bad, parking is limited (and expensive), and streets are almost all one-way. If you drive to the city, you’ll avoid frustration by leaving your car in your hotel parking garage. The city center is well served by public transportation. Plus, Seattle is very walkable. The only time you’ll need a car is if you want to explore beyond Seattle proper—that is, north of Seattle Center, east of Lake Washington, south of the sports stadiums, or to any of the islands in Puget Sound (Bainbridge, Vashon, Whidbey)—or take day trips farther afield, to Mount Rainier or La Conner and the tulips fields of the Skagit Valley. The best strategy is to rent only for the days you’re going on these day trips.

PARKING On-street parking in downtown Seattle is expensive and extremely limited. Most downtown parking lots charge $25 to $35 per day, though many offer early-bird or after-5pm specials. Some lots near the Space Needle charge less, and you can leave your car there, then take the monorail downtown. Some restaurants and Pike Place Market merchants validate parking permits. Expect to pay about $40 a day for valet parking at downtown hotels.

If you park your car on a sloping street, be sure to turn your wheels to the curb. When parking on the street, check the time limit on your parking meter. During rush hour, be sure to check whether or not your street parking space is restricted.

Taxis can be difficult to hail on the street in Seattle, so it’s best to call or wait at the taxi stands at major hotels. Two reliable companies are Yellow Cab (www.yellowtaxi.net; tel. 206/622-6500) or Farwest Taxi (www.farwesttaxi.net; tel. 206/622-1717). The flag-drop charge is $2.60; after that, it’s $2.70 per mile. A maximum of four passengers can share a cab; the third and fourth passengers will each incur a surcharge of 50 cents. Of course, you can also use Uber (www.uber.com) and Lyft (www.lyft.com) car services to get around.

Seattle is a surprisingly compact city. Following north-south avenues, you can easily walk from Pioneer Square to downtown Seattle, Pike Place Market, the waterfront, and Seattle Center. Walking from west to east is another story. When you head east from the waterfront, you will be climbing some steep hills or stairways.

Business and marketing professionals have a lot of choice in events to attend.
As the Premier Digital Marketing Conference & Exhibition Series worldwide
see why DigiMarCon stands out above the rest in the marketing industry
and why delegates keep returning year after year

Building relationships matter! At DigiMarCon Conferences we have more networking breaks on our program than others. On average there are 8 Networking breaks at each event giving delegates ample opportunities in a relaxed atmosphere to meet others over the 2-days at the event; from 1-hour round table networking luncheons to 3-hour dinner receptions. These networking breaks are set in picturesque locations to facilitate memorable experiences while fostering new relationships. Such experiences include enjoying cocktails and the Sunset over the Pacific Ocean on a private Ocean Terrace in Santa Monica, to being on the Sydney Olympic Stadium playing arena at night enjoying cocktails under the lights, to dining at the 360 Revolving Restaurant at the top of the CN Tower in Toronto for a Dinner Reception, enjoying cocktails on a private promenade overlooking Times Square in New York City, or having fun at the Dazzles Night Club onboard the Royal Caribbean Oasis of the Seas for a Farewell Party, etc.

DigiMarCon Keynotes, Panels and Master Classes are facilitated by the foremost thought leaders in the industry, from celebrity social media influencers to CMO’s from the largest Fortune 500 company brands that are disrupting the digital marketing industry, such as Google, Facebook, Microsoft, Amazon, Oracle, Adobe, eBay, Netflix and more. All presentations are pitch-free, and include actionable takeaways, case studies, strategies and tactics, ready to be applied when back in the office.

At DigiMarCon Conferences you are never ‘left in the dark’…. literally, in a large room far away from the stage and speakers, crushed in tight theater seating, without even a desk, while sitting in the dark. At DigiMarCon all delegates have premium meeting space in luxurious ballroom well-lit spaces, with comfortable seating with desk enabling delegates to use their laptop to take notes with ample charging facilities onsite in a comfortable space to learn and thrive. All tables are situated close with direct view of the stage.

DigiMarCon Conferences are affordable to attend, from single-day event passes up to two-day VIP options at a fraction of the cost of other industry events. We offer significant discounts for early bird registrations. Additionally, on top of time-limited discount pass rates, because budgets are tight, we want to make sure all groups have a chance to attend DigiMarCon. For government employees, students, academic, startups, non-profit organizations and teams, we offer generous discounts off the prevailing registration price.

Attend DigiMarCon and you become part of the show! DigiMarCon Conferences tap into the talent of the room, drawing from the knowledge and experience of the professionals in the audience. All DigiMarCon events include regular interactive question and answer sessions with speakers and the audience ideal for collaboration, audience polls, along with ice-breaker and group exercises, steered by charismatic Emcees.

Meet the Speakers in Person

DigiMarCon Conferences put you right up and close with the speakers giving you the opportunity to meet these social media influencers which you follow in person. Speakers are never hidden in private speaker rooms away from the audience, they are in the auditorium sitting right beside you and participating.

Attending a conference is a well-researched decision. There are many factors to consider such as location, time, venue, cost, speakers, content, etc. At DigiMarCon our results-obsessed Customer Service team are at your service before, during and after the event to help with your needs. It’s at the core of what we do — it drives our business. Offsite, we are ready to assist you via phone, ticket or chat. Onsite at our Conferences, friendly DigiMarCon staff serve as your hosts. They welcome your input and are happy to assist you.

DigiMarCon All Access & VIP Passes include a 12-month on demand access to hundreds of hours of DigiMarCon speaker keynotes, panels and master class presentations from recent DigiMarCon Conferences, including videos, slide decks and key takeaways, available on demand so you can watch what you want, when you want.

Attendees of DigiMarcon Conferences gain membership to an exclusive global Digital Marketing Community of over 500,000 worldwide subscribers to our award-winning digital marketing blog and over 70,000 members to our Digital Marketing Professionals Group in LinkedIn (visit https://www.linkedin.com/groups/2661359/). This global community comprises of innovators, senior marketers and branders, entrepreneurs, digital executives and professionals, web & mobile strategists, designers and web project managers, business leaders, business developers, agency executives and their teams and anyone else who operates in the digital community who leverage digital, mobile, and social media marketing. We provide updates to the latest whitepapers and industry reports to keep you updated on trends, innovation and best practice digital marketing.

REGISTER NOW TO SAVE YOUR SEAT
To ensure all attendees get the full benefit of an intimate conference,
we are only offering a limited number of available seats.
RESERVE MY SEAT NOW
AS FEATURED IN: